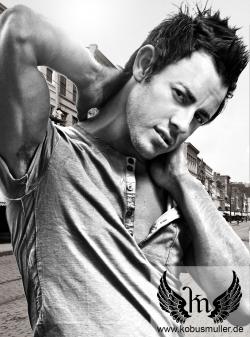 Kobus quickly won over millions of viewers with his genre ranging between Josh Groban en Mathys Roets. Songs like You Raise Me Up and Jerusalem was got standing ovations on several times. It was clear to everyone that his voice can do a variety of genres. His modern version of the Afrikaans hit song Geelperske reën immediately was a huge success. He also plays guitar and Piano. His first commercial and self titled album was released in 2008 with most songs written by Kobus. Duets were also on the album with Patricia Lewis and Nicholis Louw, his Supersterre couch. The duet with Patricia Lewis, Luister Wat Jou Hart Sê, won an INTERNATIONAL Eurostar award in 2009. Kobus got a Golden award from Sony Music for this Album for album sales exceeding 20 000 units.
In the same year he also did the opening act for the INTERNASIONAL Pop group ‘Smokie’. Kobus is also the current record holder in South Africa for the most CD sales in one day at an in store promotion.

With his second CD, Sou Jy My Sê, Kobus ‘tried out a new Genre by recording both ballades and Pop songs. Songs like Because We Believe (a duet with Nicholis Louw), Ek Se Jou Naam and Swaai Jou Lyf took the radio charts by storm. After the CD launched Kobus did his nationwide ‘SWAAI JOU LYF’ tour. He also toured for a year with Nicholis Louw.
In 2011 he received an award from IFM for his song ‘Ek se jou naam’ for being one of the TOP 10 most play listed song in 2010 on the radio.

Kobus released his album, ‘Alles en Meer’ in June 2011 and also made it public to the media at the CD launch that he has been adopted as a child and that one of the songs on the album was written for his biological parents. This album will show off Kobus’s unique voice and songwriting talent with radio and dance floor hits like ‘Hey June’, ‘Slow Rider’ and ‘Maak dit nie seer’(the song Kobus wrote for his biological parents). Kobus wrote 11 of the 12 songs himself. This song was also nominated for a Huisgenoot Tempo award for the best pop album in 2012
He received an award from IFM for his song ‘Hey June’ for being one of the TOP 10 most play listed song in 2012 on the radio.

In 2012 Kobus was signed as an underwear model for PHD Underwear. He also won the Heat Magazines MANWATCH competition for the sexiest man, sexiest torso and six pack in South Africa. He was also listed in the Heat Magazine under the TOP 100 sexiest celebrity’s world Wide by public choice.
In the end of 2012 he released his latest album – ‘Tribute to Engelbert Humperdinck’. In this year Kobus also sang the National Anthem to Zuma the South African president and the annual AFASA event.

In 2013 Kobus received an award from IFM for his song ‘HEY JUNE’ for being one of the TOP 10 most play listed songs in 2010 on the radio. He also featured again on another 13 part TV series where they took a look on the progress he made since Supersterre a few years ago. He was also chosen as the public’s favorite from all the seasons of the SUPERSTERRE reality tv series throughout the years. He also did acting on the popular South African TV soap – 7de Laan

In 2013, Kobus signed contract with Toi Toi Toi records in Germany, Europe. His first International single: Turn up the radio, released worldwide 14 April 2013 and achieved various TOP 30 Radio Charts in Europe and South Africa. With all of the success with his first single his second single: You are like sunshine in the night, was released and made its debut on the Nr1 position on the European Radio Charts. He also did duets with various German Artists